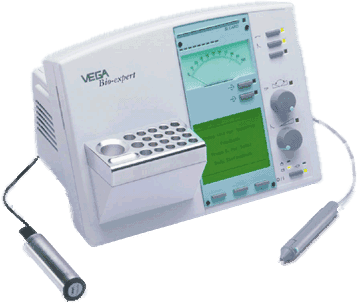 Bioresonance Diagnostics is a system, which is beginning to grow in popularity among doctors and other health professionals.

Bioresonance therapy (BRT) is a non-invasive therapy using the biophysics of the body.

The theory behind BRT is that every cell in the body resonates at a particular frequency, similar to a tuning fork resonating and producing an acoustic wave.

Groups of cells (organs) resonate at their frequencies producing an electromagnetic field and unique frequency patterns.

However, when pathological conditions arise, there will be a disruption or augmentation of these waves leading to disease.

For example, such disease states can occur due to the predominance of excitation (pathological stress), resulting in a disrupted functioning of the Central Nervous System, with a resulting disease anomaly.

BRT is based on the theory that cells communicate with one another by biophotons or “flashes of light” (photon radiation) at specific frequencies.

The Vega Expert Bioresonance Measuring device is a resonance bio-regulatory technique known as the Vegetative reflex test that was developed in Germany by Dr Helmut Schimmel in the 1970s.

How does the Vega machine work?

Attached to the Vega – Expert machine is a small metallic platform (honeycomb) in which cylindrical holes have been drilled. Each hole can hold a small ampule or medication or food to be tested.

The metallic table is attached to the Vega system.

EAV researchers have discovered that any substance placed upon the metallic table becomes part of the energetic circuit of the VEGA Machine.

When the EAV practitioner first touches the probe to the acupoints for energetic reading analysis, he or she does so with nothing on the metallic accessory table in order to examine baseline meridian conditions.

Once the initial electrical readings have been taken, the absolute level of micro voltage on the meter tells the practitioner if the acupoint and associated meridian are electrically normal or in a state of energetic imbalance.

If the acupoint is found to be out of balance, the practitioner may then place various homeopathic remedies on the electrical accessory table in order to observe the changes in the acupoint electrical readout.

Any substance that is placed upon the metallic table becomes part of the energetic circuit. It is believed that certain aspects of the remedy’s subtle energetic patterns are conducted over electrical wires, in a fashion similar to electricity. For most remedies placed in the energetic circuit, additional acupoint electrical readings will reveal no significant changes from the initial measurement.

However, when a remedy or a substance is placed on the metallic table which matches the frequency of the energetic imbalance of the patient, a resonance effect occurs, and a significant change in the acupoint reading is observed.

Utilizing the VEGA device, the patient is linked through his/her acupoint meridian interface with the needed subtle energetic frequency. A resonance effect occurs between the patient and the circuitry.

The only energetic frequency which has diagnostic significance is one which resonates with a relevant biological frequency of the organism being tested.The VEGA device will measure variation in electrical outputs on a voltmeter readout from an acupuncture point.

The Vega machine is capable of going beyond the diagnosis of energetic imbalance levels in particular systems. It is frequently capable of finding the actual causes of the energetic dysfunction, as well as potential cures for the disorders. The manner in which the Vega machine is able to carry out this type of analysis is a function of biological resonance.

What can be measured by the Vega?

I evaluate individual needs and I use the principles of naturopathy and the science of nutrition to develop a personal plan for each client in order to improve his or her health.

Toxic Metal Testing is an initial screening test using a tissue hair mineral analysis (THMA) as it is a good way of determining what levels of toxic metals you have circulating in your blood over the last couple of months.

The metabolic typing diet test is based on the assumption that metabolism, which is a term that is used to describe all chemical reactions involved in maintaining the living state of the cells and is unique for everyone, thanks largely to the genes we have inherited from our ancestors.

A nutrition consultation is a session during which the practitioner takes the time to listen carefully and understand what your presenting health problems and symptoms are. It includes an exploration of one’s health problems and the creation of a plan based on individual nutritional needs.